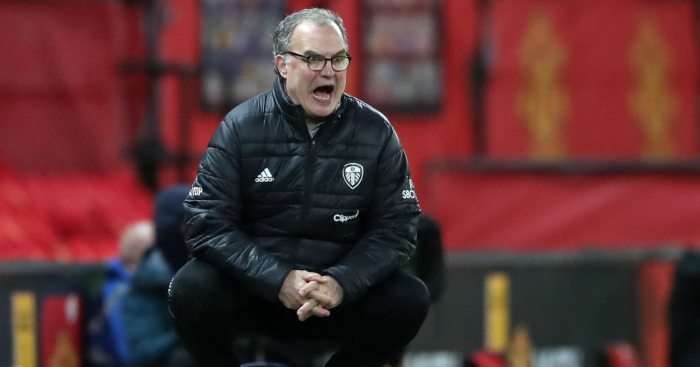 Marcelo Bielsa and Leeds will accept and ignore the critics. Good on them for doing it their way amid the bluster.

This season’s absurd and outrageous nature is perhaps best encapsulated by the newly-promoted team no-one can turn away from. Leeds United, Premier League Version 2.0, a ruthless but imperfect side made solely in one man’s vision, a team that is able to bring its own fragrance and pit it against the rest with exceptions.

But like most experiments conducted by an eccentric creator, Bunsen burners will singe hands, sometimes the wrong chemicals mix and boil over, things spill, glass apparatus smash on the floor. It can be disastrous from time to time, but trial and error is all in the name of progress.

At least that’s the idea. As long as the line is clearly ascending, Marcelo Bielsa shouldn’t face too much bother, given the equipment he has available to him compared to the rest.

And yet the notion has passed some completely by, and there is an eagerness to reveal this manager for what he really supposedly is: a charlatan selling false promises by the bottle from town to town.

It’s strange because even if there has been some thorny, hard-to-swallow results, it’s been a pretty good season all in all, with the Championship champions perched 12th in the Premier League and relegation not even a real consideration at this point.

The criticism, despite that, is like something we’ve never seen before for a side and manager fresh into the league. There is normally a degree of leniency around a newly-promoted side, but none where Bielsa and his abiding students of Murderball are concerned.

Last week saw online champagne glasses clink together in joint celebration by some rival fans and pundits as those who have been proved wrong for the entirety of the season were at once proved right by a single game, the graceless Crawley Town defeat finally shining a light on this mad quack in tracksuit and glasses.

The schadenfreude was remarkable both in its abundance and collective nature: broadcast pundits and fans rarely align but boy was there enjoyment to be had from the hipster’s favourite manager losing so comically to a side boasting a reality TV star whose appearance in the closing minutes was meant to a hilarious final two fingers to a man misguidedly admired by so many.

“Yes Leeds are 2-0 down to Crawley but you’ve got to admire how they go forward and the way every player works for Bielsa, the mans a genius” pic.twitter.com/hPYzySl2rF

But the whole eagerness to take to social media and criticise Leeds for every misstep this season appears to come from the fact Bielsaites are nothing more than Generation Xers who have had the wool pulled over their eyes; could it be that even Leeds fans are blinded by his eccentric ways?

It’s probably best to ask Leeds fans their thoughts on such things. So thank you for joining and partaking in the survey, supporters of Leeds. A simple, singular question for you to mull over: does your enjoyment of supporting Leeds right now stem solely from the fact your manager sets out his own unique, disjointed, gung-ho style of play; or is it more to do with his ability to guide Leeds back to the Premier League after 16 cold years away as you sit 12th with the fifth-best attack in the league in terms of goals scored?

The right answer is probably both, because, you see, those two enthralling facts are not mutually exclusive.

Presumably, then, any affection or admiration you have of Bielsa comes down to nothing more than them doing very well despite some bothersome defeats in the league and the terrible domestic cup displays. It’s unlikely that it’s because you’re a hipster who’s been seduced by the mere notion of having your club managed by someone with a peculiar nature, high octane tactics and a foreign name.

Hipsterism in football – or, as it should be called, enjoying the sport in any which way we like – typically errs on the side of success and brilliance, anyway. Pretty football that pleases the soul seldom means there’s a terrible manager afoot who must be given the boot sharpish. Like most great art, the more carefully nurtured, the higher chance of it bringing acclaim.

Indeed, there seems to be a total disregard for performances and attacking aptitude by some pundits who see nothing more than the latest result and base their opinion on that. It must be infuriating for most fans, who crave ambition and progress over a goalless draw when relegation is hardly on the horizon anyway. Xenophobia, allegiance to British acquaintances, jealously: all are likely root causes for such uproar.

Yes, it probably comes down to all those gooey thinkpieces about his tactics, each sentence fawning over his style, the fact he got the team to pick up litter in the training ground. Such articles were in abundance even before he had got Leeds promoted, and surely that has ruffled a few feathers along the way. Positivity creates a kickback effect by those keen to restore balance.

Even the more rabid reporters have taken a swipe: a journalist expressed that he could see why Bielsa hasn’t won anything in Europe with ‘tactics like this’ after their mauling by cross-county rivals Manchester United, whose defence cost £175million compared to Leeds’ £5million. It was written almost as if the Argentine had been handed the keys to Real Madrid for the preview ten years with an unlimited kitty and not, at best, working with Athletic Bilbao, who operate under the strictest transfer regime in Europe.

Can see why Bielsa hasn’t won anything in Europe with tactics like thi. A predictable set-piece goal conceded by Leeds. Well-taken by Lindelof. #mufc

Achievement is relative to what you have. And this campaign Leeds have done moderately well while making some huge strides: they have only scored two goals fewer than attacking zenith Chelsea, they’re on course to finish mid-table on some 50 points, and to score 67 in total, which will amount to the third-highest by a newly-promoted side in Premier League history.

All this with the 17th most valuable squad in the league.

But stripping away the cold, hard numbers and stats, however painful for some people it might be, it is possible to enjoy aspects of football away from the figures, even away from winning. It is possible to find that a manager’s character has some bearing on how you much you enjoy watching your club. Unlike some pundits giving their £200 on a neutral club on TV, you do not merely look down at the results each week and come away either smiling or in a state of disarray at what you see. The whole experience of the journey counts a lot: whether the manager speaks up or down about your club matters; whether the style of play fits your club’s philosophy matters; whether your team sat back or went for the three points matters.

A prime example was when Liverpool beat Leeds on the opening game of the season, putting four past them in what was an ultimately a disappointing result for the Whites. Had Bielsa thrown down his glasses and barged past his translator, revealing what we all know in that he can in fact speak English, before yelling into the camera, “ARE YOU NOT ENTERTAINED?”, even the hardest Leeds fan, in lieu of the result, would have a hard time denying that they were not at least a fraction exhilarated by what they had just witnessed, that at least there was an attempt to win from the get-go, even against the champions at Anfield.

Bielsa has had a whole Premier League fanbase on the edge of their seats despite the lack of atmosphere surrounding this season. They’re already an asset to the league and should be celebrated for that.

And isn’t that what it’s about? A tenacious charge in the face of adversity, rather than a gracious bow and escape through the side door, like so many coaches do before receiving praise from their friends in the media.

Most who follow the sport would rather finish 15th and have stood up in every game, providing a blueprint which drives into the heart of defences, rather than to have a vanilla performance that grants the opponents too much respect.

Of course there are issues: the trouble with having such a lopsided, oblong system is that it can either fit perfectly (see the thrashings of Newcastle and West Brom) or it leads to their own disembowelling (see heavy defeats to Man United and Leicester), while questions remain whether such attacking zeal would ultimately last in the Premier League for a long period. The goalkeeper who is poor in form on the pitch and off it should be promptly shipped away, while the fact more than half of the nine games they lost in the league last season came in December, January and February suggests that Murderball does have a habit of fatiguing Bielsa’s players.

But most know that and will take Leeds for what they are: a very watchable side under a unique manger. It’s just best we don’t get annoyed at notions no-one even believed or stated in the first place.