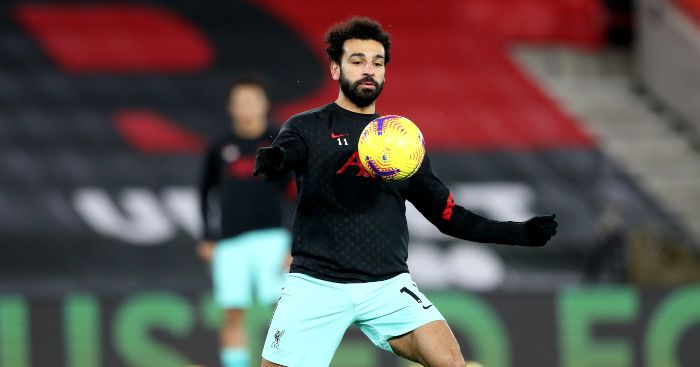 Liverpool midfielder Fabinho says Mo Salah “hasn’t changed at all” despite rumours linking him with a move to Real Madrid.

The Egyptian forward has been linked with a move to Spain ever since a former teammate said he was ‘unhappy’ at Liverpool.

Barcelona and Real Madrid are thought to be interested in signing the 28-year-old in the summer.

Salah has been in exciting form this campaign, scoring 13 league goals and assisting three more in just 16 Premier League appearances.

And Fabinho claims that none of the transfer talk is affecting Salah with the former Chelsea man still acting the same around the training ground.

“Big players will always have their names involved in rumours. Salah plays for Liverpool, one of the biggest teams in the world. I think it’s normal to see his name linked to other teams, especially from different leagues,” Fabinho told ESPN Brasil.

“Anyway, I see him very happy here and pleased with his performances this season. He’s very demanding with himself, he wants to be the best, he wants to help the team and works hard for it.

“It’s always been the case and it hasn’t changed at all. He keeps scoring goals, which everyone is used to seeing. In the changing room he’s always talking to everyone and making jokes.

“I don’t see anything affecting him. Overall, I am not following the news so I’m not sure about any rumours. As I said, top quality players will always be linked to big clubs.”