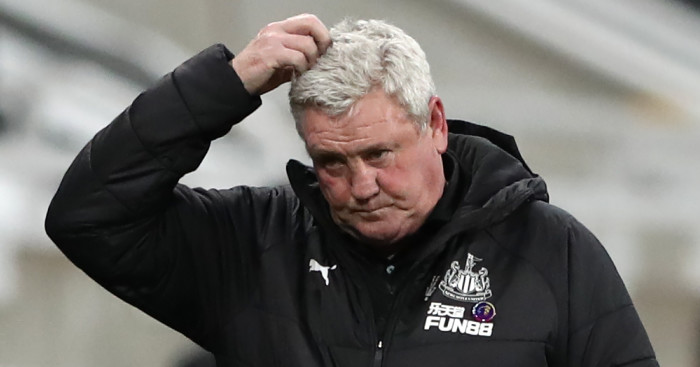 Loads of pricks this week. Absolutely loads of them. Most of them, alas, ineligible having already won this honour before or already dealt with elsewhere on this site by other pricks. But there is still one prick who, against the odds to be honest, we haven’t got round to until now.

So who’s this week’s prick then?

Steve Bruce for picking that team and that performance at Sheffield United; Mike Ashley for continuing to back him because he probably won’t get them relegated and that’s all that matters.

What have they done?

Steve Bruce is not a good football manager and Newcastle are not a good football team. They’re drabber than ever before, which is particularly cruel after the carrot of a takeover was dangled tantalisingly over the summer. While Newcastle fans were supposed to fight that takeover because of the people behind said takeover, they are expected to sit back and be grateful to have some sort of Premier League football to watch under Bruce and upstanding citizen Ashley because they should know their place and not hope for or, more despicably still, demand something more.

As ever with Newcastle, the fans do not want the moon on a stick. They just want a club and a team they can be proud of. That they can be excited about. If they could win a pot or two somewhere along the way that would also be lovely. But they’re not the most demanding fans in the world. They’re also not the ‘best fans in the world’; they’re just football fans. And long-suffering ones. What have they done to deserve this never-ending cavalcade of drudge? Dreary football, an embarrassment of an owner and no prospect of anything getting any better any time soon. Football is supposed to be escapism, a time to forget about the dreadfulness of the real world. Newcastle fans could be forgiven for popping on the latest government briefing to distract themselves from an eight-game winless run and a defeat at Sheffield United that quite literally every single one of them saw coming a mile off.

It was just so inevitably and entirely Newcastle. A team without a Premier League win in six months; of course that run would end against Newcastle. Once you stop and think about it, how could it possibly have ended against anyone else? It could only be the one team that Derby managed to beat in their annus horribilis.

Worse, Bruce seemed to know it as well, sending out a deeply pedestrian and defensive side designed to spend the game on the back foot – against, and we can’t stress this enough, a side whose form across their previous 20 top-flight games read drawn two, lost 18. Newcastle weren’t the victims of some outlandish smash and grab. They were outplayed and deservedly beaten by a team still just about on course to be the worst Premier League team of all time.

And the day after that? Sky Sports understands Bruce retains Ashley’s support because they have ‘a good working relationship’ and will probably stay in the Premier League. And that’s the real – nay only – quiz.

Mike Ashley has done many things to embarrass, humiliate and infuriate Newcastle’s supporters across the entirety of his ill-fated reign. Steve Bruce has never been a good football manager.

Someone was always going to lose to Sheffield United sooner or later. And I guess, reluctantly, we shouldn’t entirely overlook the fact that Newcastle’s joyless, spirit-sapping football still has them seven points clear of the drop zone.

So what happens next?

Been a busy boy this week, has Jose. Turned on the charm at Marine because of course he did. Even when he’s being nice he’s being a prick. Fair’s fair, he pitched it just right, didn’t he? The prick. Said lots of nice things, great line about understanding Marine’s dream before bringing them back to reality. Said that the best way to respect them was to pick a strong side and beat them, then did precisely that. Even brought some more big guns off the bench long past the point such things were necessary. Gareth Bale for Dele Alli was a tremendous bit of work.

That all dealt with, Jose went back to being a more regular prick. Claiming that having a game postponed is a bigger problem than being asked to play one at 48 hours’ notice was laughable, as was his insistence after yet another entirely predictable 1-1 draw after failing to either extend or defend a lead was all down to his players.

But his response to the Mesut Ozil burn was very strong. Come for the King of the Pricks, Mesut, you’d best not miss.

Worthy contenders abound this week. Telling footballers they shouldn’t celebrate while simultaneously insisting that it’s perfectly fine to carry on playing football is some impressive cognitive dissonance and a naked attempt to create a distraction from, well, absolutely everything else. Just a heads-up, the inevitable media sh*tstorm about HUG CRACKDOWNS after Mo Salah or Sadio Mane or Bruno Fernandes or – heaven help us – Paul Pogba or Marcus Rashford are deemed to celebrate too enthusiastically with a team-mate after scoring a winning goal in the biggest game of the season so far while 1500 deaths per day receive no more than a shrug of the shoulders may well be next week’s prick. The whole spectacle of an actually really good FA Cup third round that we nevertheless all know was a super-spreader. Scott Parker had half a point about Fulham being brought in to play their postponed game against Spurs at such short notice after Villa postponed their own game against Spurs. It’s true that teams agreed and acknowledged this sort of thing could happen, but it almost certainly wouldn’t have happened to a bigger club. All that said, Parker’s sense of perspective seemed a little off in labelling it “scandalous”, as did the papers who ALL-CAPSED a couple of rearranged fixtures as COVID CARNAGE at a time when thousands of people are literally dying. The subsequent 1-1 draw was, of course, every bit as predictable as Newcastle’s defeat at Bramall Lane. Then there was the Telegraph’s Luke Edwards writing an inflammatory article about Rashford under an inflammatory headline and even more inflammatory sub-head on a paywalled website, and then having an attack of the vapours when people became inflamed. And, finally, our old friends Leeds who, having passed up the opportunity to get rid of disasterkeeper Kiko Casilla for bad racism, find themselves looking for a way to get rid of him after a bad game at Crawley. Quite a week.

Parker admits that Fulham ‘may fail’ to stay in the PL