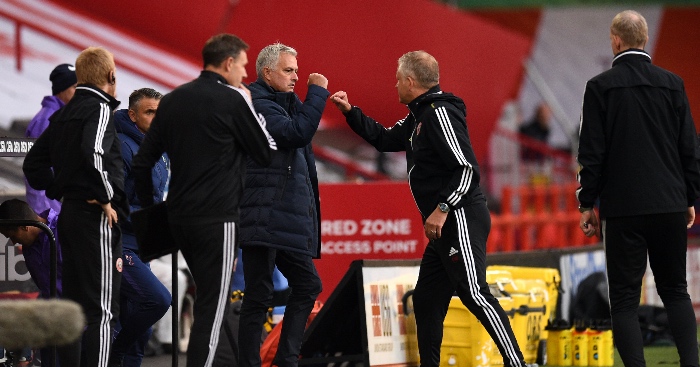 They will be hoping to cause an upset by picking up another victory, following their 1-0 win against Newcastle.

Wilder has heaped praise on Mourinho ahead of their clash this weekend. He told reporters: “I have an incredible amount of respect for Jose. He’s my favourite current manager in the Premier League, amongst a load of really fabulous managers, but I really like him.

“The Premier League is full of top managers but for me he is the best in the business. He makes players winners as well as being the ultimate winner himself.

“He is a box office manager who, I believe, is top of the tree. He has done it in different countries, and I know he splits opinion, but he doesn’t split opinion on me.

“He’s a fabulous guy to speak to as well, even away from the game. He’s one of those people who you get nervous about inside, and I’m a 53-year-old man getting nervous about meeting Jose Mourinho.

“He is the big one, the main man, who is one of the main men in world football and has been for some time.”

Mourinho has won countless trophies since taking over at Porto in 2002. He famously won the Champions League in 2004 which helped to catapult his career.

The Portuguese manager has won league titles in England, Spain and Italy. His next major task is to bring silverware to the Tottenham Hotspur Stadium.

Their best chance this season is arguably the Carabao Cup. Spurs reached the final after beating Brentford 2-0 earlier this month.

They face Man City for the trophy in April and will be focusing on a top four spot in the mean time.