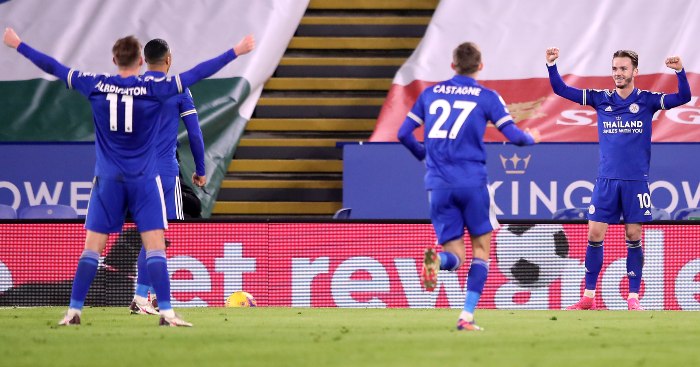 Brendan Rodgers felt Leicester were too ‘socially-distant’ in the first half of their 2-0 victory over Southampton.

James Maddison and Harvey Barnes strikes sent the Foxes second in the Premier League after an entertaining encounter at an impressive tempo in front of empty stands at the King Power Stadium.

But Rodgers wasn’t impressed with his side’s performance in the early stages.

He told BT Sport: “It was a great win for us. I thought the first 25 minutes we were social distancing, we never got within two metres of them at all. Just too passive, not aggressive enough, which is unlike us really.

“But we then started to press the game much better and that enabled us to sustain attacks a bit more and we get the first goal from that. It was a brilliant finish by James.

“Second half we were much, much better. We were aggressive, we counter-pressed better and we should have scored more than two goals. But at the same time we defended well.”

Excellent stuff from the Leicester star! 🦊

Maddison handed out pretend handshakes in celebration of his goal following criticism this week of footballers failing to respect social distancing.

He told BT Sport: “It was something the gaffer mentioned, something we probably need to start doing to bring a bit of a lighter mood to it, because if little things like that is what’s required to keep football going, that’s what we all want at the end of the day.

“That’s something we’ve been told – there was a meeting yesterday – we need to try to implement to stop the gatherings of people and I just tried to turn it into a light-hearted joke. Footballers get a lot of stick and it’s nice to just try to turn something like that. I think the whole country wants football to continue.”

Regarding his goal, the midfielder said: “It was nice to see it go in. Them ones are tough, especially from the tight angle. I remember my dad saying to me, when you’re in them tight angles, the only place you can really score is the roof of the net because the keeper’s so big, so that was in my mind.”

Liverpool star would be ‘devastated’ if he leaves