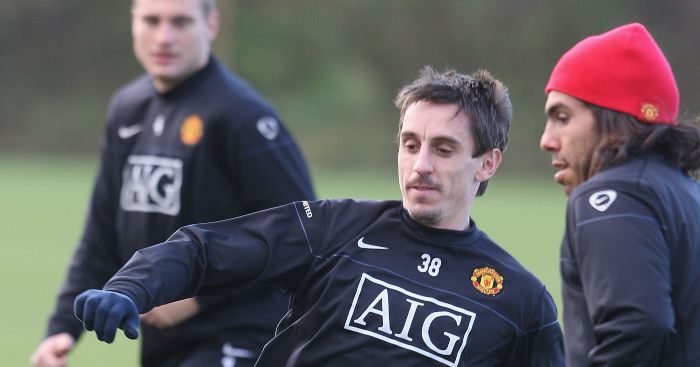 Gary Neville says that Wayne Rooney was the “best centre-forward” that he “ever played with” at Man Utd.

The former England captain agreed a permanent deal late last week to become Derby manager until the summer of 2023, having succeeded Phillip Cocu on an interim basis in November.

Man Utd and England’s all-time leading goalscorer spent seven years of his career playing in the same team as Neville for the Red Devils, before the Sky Sports pundit retired in 2011.

Speaking about Rooney’s career on Sky Sports’ Monday Night Football show, Neville picked out Rooney as the “number one” striker he’s played with at Old Trafford.

“For me he was the best centre-forward I ever saw at Manchester United and ever played with,” Neville said.

“I have him number one, up front, Cristiano Ronaldo alongside him in every single of the best Manchester United teams that I played alongside.

“That’s the highest compliment I can pay him, because I played with [Eric] Cantona, with [Mark] Hughes, with [Dwight] Yorke, [Andy] Cole, [Teddy] Sheringham, [Ole Gunnar] Solskjaer, [Dimitar] Berbatov, [Carlos] Tevez, great strikers from all over the world, not just in England. Rooney would be my number one.”

Neville added: “The contribution to the team at all points of every game was unbelievable.

“In and out of possession, in the dressing room, the energy every single morning. He was an absolute livewire, street fighter, tough, score goals, assist goals, the best defender, never give in. Everything you would want in a footballer he was there, and to me the best striker I played with because he did everything.”