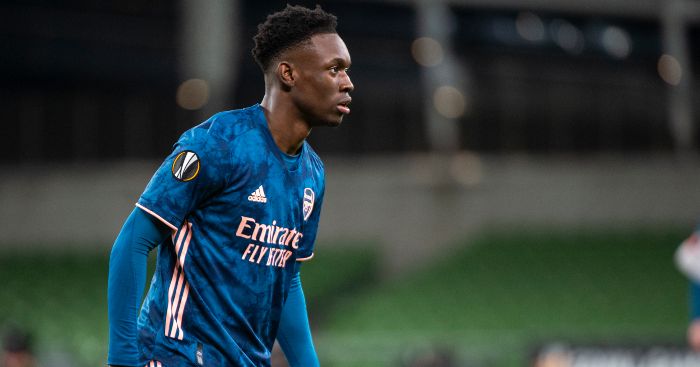 Folarin Balogun has 15 offers to leave Arsenal on a free transfer in the summer, according to journalist Fabrizio Romano.

The young forward scored in the 4-2 victory over Dundalk in early December, the second time he’s come off the bench to score in the Europa League.

He’s previously been the subject of interest from Sheffield United, but the player opted to stay at the Emirates to fight for a starting place.

FEATURE: Five PL players back from the brink like John Stones…

However, Romano claims his lack of game time since the summer means he ‘will decide among 15 clubs that approached him as free agent’ unless he ‘plays more’.

Balogun, who is out of contract in the summer, has ‘always been open to stay at Arsenal’ and the ‘priority for Folarin and his agents’ is for the forward to play more.

The 19-year-old will ‘consider a new contract’ if his game time increases but Romano adds that ‘nothing done/signed yet’.

Balogun always been open to stay at Arsenal… but he needs to play. This is the priority for Folarin and his agents.

If he plays more, he’ll be consider a new contract. If not, Balogun will decide among 15 clubs that approached him as free agent. Nothing done/signed yet 🔴 #AFC

Arteta confirmed after their victory over Dundalk in Decemeber that club officials are determined to keep the promising youngster, he said: “We’ve been having some discussions with the player.

“He knows that we want to retain him at the club and we know that the length of his contract at the moment is an issue, but we’re trying to resolve it in the best possible way.

“We want him to stay and he’s said to me that he wants to stay at the club, so hopefully we can reach an agreement and extend his contract.

“He’s done really well. Every minute he’s been on that field he’s been superb and today he looked a threat again. He scored a goal and set up another one, and he looked really lively and mature on the pitch.”