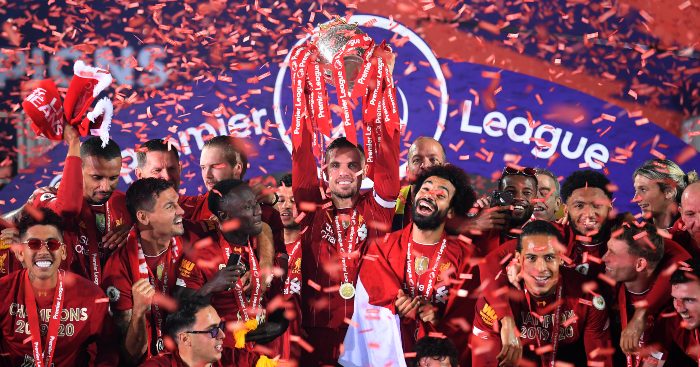 Keep your mails coming on Liverpool and anything else to theeditor@football365.com…

After Liverpool won the League last season, many were quick to discuss how this was one of the greatest Premier League teams of all time. Of course, in many ways, they are…but I always felt that something was missing from that title win.

There is nothing quite like watching your team hold on to a 1, 2 or 3 point lead, week after week, until you win it. The only thing better? Putting together a run of results when your 1, 2 or 3 points behind, and eventually finishing above the team that were ahead.

This is why, for me, Man City winning the season before was more impressive. They HAD to win every game. They HAD to beat Liverpool in the January (I think it was, Bernardo had a masterclass). They put together a run of results that was extraordinary…all with Liverpool relentlessly on their back. Every. Single. Week. It was exceptional to watch both teams, and had City dropped points towards the end, Liverpool would have won it…and that would have been far more impressive than last year, for me.

There are teams that can handle it, and teams that can’t. Liverpool can handle chasing down the leader, clearly. They can handle being 20 points in front. Can they handle being 1, 2 or 3 points ahead? Can they grind out results when they play poorly (something they have done exceptionally well over the last 2 years). Can they respond to those awful, lucky, 93rd minute wins of the 2nd placed team? That all changes with pressure. The obvious answer is, yes they can. But 4 times in 7 games, against bottom 5 clubs, they have drawn. They had a chance to pull a further 8 points ahead…and they have failed. Tomorrow they may share that top spot…if only for a short while.

We are seeing a great season play out. Of course, Liverpool are capable of going on to win 18 of the next 22 games…but the pressure of the chasing pack might well be enough to see them stumble, and give everyone else a chance. They are undoubtedly the best team in the country, with the best manger…but this latest draw felt like a statement. It feels now like the Liverpool of the last 2 years is no more…that they can be beaten. That their form can be matched. I watched last night as a United fan, hoping they drop points as if we had a chance to win the league (I tremble as I type), and all I kept thinking was: “This feels like Ivan Drago in the corner…bleeding for the first time…realising that the opponents are made of iron.”

I don’t expect us to challenge Liverpool down to the final few games, I expect them to pull away when injuries and form pick up. But I must say, for Manchester United to be (potentially) joint top of the league on New Year’s day, almost half way through the season…chasing Liverpool for the title and shortly heading towards a MASSIVE game at Anfield…is nothing short of mesmerising.

And I’m not discounting the rest either…I think this could be the greatest title race of the Premier League era. It will come to whoever handles the pressure of it all. Manchester United MUST make a statement by beating a superb Villa side tomorrow. The leader drops points? You win. No choice. Liverpool need to respond…and on we go. If Liverpool can pull away and retain the title, with their injuries and (hopefully) an actual challenger or 6, then I would see it as a far, far greater achievement for them than last year. And if its United…well I need to stop dreaming!

Happy New Year to all…and Godspeed for the year ahead!
Tommy “Bruno can father my next child” Vincent MUFC

In defence of Wan-Bissaka

Whilst I agree he is woeful going forward (which is odd for a former winger), rather than spend another £50m on a fullback, I’d prefer to see Utd sign a player who actually wants to play on the right of the attack, and had the ability to beat a man on the outside. OR, wait and see if either Pellestri or Traore have what it takes to make a contribution and rotate with Greenwood. The beauty of Wan Bissaka is that he means a right winger has little defensive work to do and can afford to stay high up the pitch and pin the opposition fullback. Sancho would be ideal, but I wonder if a cheeky bid for Adama Traore would add some wow! factor.

Happy New Year one and all
Andrew, Banbury

Piling up on Guardiola

Gary, AVFC, decided an email about a possible ‘circuit break’ for the Premier League needed to end with a criticism of Guardiola. Guardiola, so Gary argues, is a hypocrite for wanting a break and also wanting fixtures less congested. What?

Both of those entirely plausible scenarios would make Guardiola’s positions not (even approaching) hypocrisy.

Why do people seem so intent on criticising Guardiola?
Nathan, Newark

Another way of looking at things…
Vinnie, Minty, and Jamie are not amused. Liverpool traveled to Newcastle, dropped points, and now disaster looms. Too many ties will be Liverpool’s undoing. The substitutes came too late. TAA was not at his best. Such a high line is inviting trouble.  The pressure is on Klopp. With so little competition for places, complacency has obviously crept in. And. So. On.

There is, of course, another way of looking at things. Villa absolutely throttled Liverpool a while back. Since then, Liverpool is undefeated in the league. VVD was assaulted, his season ended . . . and Liverpool simply managed. Gomez went down, probably for the season. Matip is frequently injured. Thanks to Richarlison’s stupidity, Alcantara has barely played 150 minutes this season. Jota started brilliantly, then got injured. Milner, Alisson, TAA, Fabinho  – they have all been unavailable at various times.

Yet here we are. It’s New Year’s Eve and Liverpool is in first. They’ve also progressed in the Champions League. Alcantara seems fit again; Jota’s return is not too far off. Curtis Jones has demonstrated he can play with the big boys. Ditto Nat Phillips and Rhys Williams and Caoimhín Kelleher and Neco Williams. Remarkably, the defense has actually tightened up since Pickford’s unpunished idiocy. Wijnaldum has been imperious. So has Robertson. Firmino seems back on form. Heck, even Minamino has scored!

Yet, even though it’s a tight race, Liverpool still leads it. Will they win? I hope so. Are there plenty of twists and turns ahead? Probably. Can you always win the league by 20 points or so? No. Am I going to lose my mind because of a couple of frustrating draws? I’d rather not.
Chris (YNWAing over the pond), Canada

“Leeds did nothing wrong”

Joel Sparks of Flintshire asks us to imagine a hypothetical situation where the roles would be reversed, and Liverpool’s official Twitter took umbrage with, say, Gary Neville’s comments on Liverpool.

I’m a Leeds supporter and although I’m not going to talk about the twitter incident (I won’t have anything new to say), I do want to talk about something related. As you all know, there is a widely held belief that Bielsa’s Leeds team tends to burn out at the end of the season. I don’t understand why people think there is a pattern with Bielsa’s Leeds. This is Bielsa’s 3rd season at the club so we can’t use this season as proof. Last season had a break so we can’t use that either. We can only use the 2018/19 season. That doesn’t sound like the basis to form a pattern.

So there you go, I can’t tell you if Bielsa’s other teams do tend to run out of steam, but I can tell you that this one probably didn’t. The players just bottled it.
Ken Lalobo, LUFC (Happy New Year everyone!)

Bergwijn adds to Son and Skipp injury scares for Tottenham