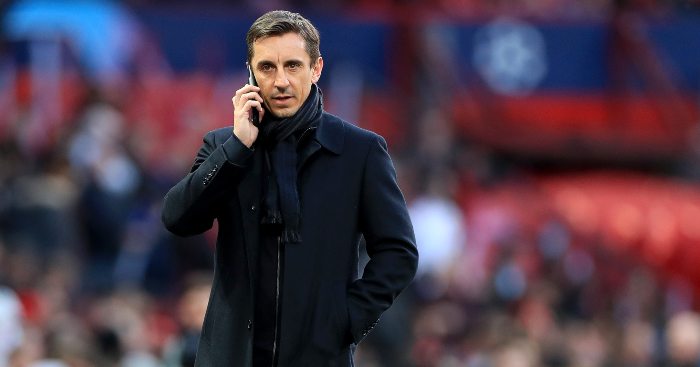 Former Manchester United defender Gary Neville thinks the players at Arsenal have become “bored” of the tactics under Mikel Arteta.

The Gunners are currently on a seven-match winless run that has seen them lose five in that sequence of results, with Arteta’s men now 15th in the Premier League table and only four points outside the bottom three.

Only the current bottom three have a worse goal return than the 12 managed by Arsenal in their 14 league outings so far this season.

And Neville reckons it has become a “real struggle” for the Arsenal players to produce under Arteta because of his dull tactics.

“I don’t think they’ll get relegated but the fact were even discussing it, the fact we’re seeing where they are in the league is a real problem,” Neville said on Sky Sports’ The Gary Neville Podcast.

“I think we know what’s happened here at Manchester United since Sir Alex Ferguson left, it’s a massive challenge when someone has been there for so long.

“We knew when Arsene Wenger left there would be a transition period, a transformation in the club that would take some time. Obviously, Unai Emery didn’t work even though I stand by what I said at the time, he’s a great coach, it just didn’t work at Arsenal.

“I think there are elements of what happened here at Manchester United that are now happening at Arsenal. I think Mikel Arteta has demonstrated that he can coach a team, that he can get a team organised but something’s not right.

“It’s difficult to put your finger on it, you end up saying is it the coach? Is it the management? Is it the recruitment? But the problem is when you get results like they are you end up blaming all of it because it’s probably all true. There’s an element of it all going wrong at the same time.

“The big issue for me is that towards the end of the Arsene Wenger reign there was massive criticism of him.

“People accused the club of becoming stale, of him becoming stale, they were getting sick I suppose of just qualifying for the top four, or just sitting outside the top four, but the football was still pretty good, you still thought when you went to watch Arsenal that you’d still see good football.

“But [now] the football is really bad. They are not good to watch. I watched them a few weeks ago against Leeds and I thought they were turgid. Watching them against Everton it’s methodical but it’s not Arsenal.

“Because we’ve just been used to Arsenal being that free spirit of a team for many, many years and playing good combinations, good passes and interchanging. It just looks now very drab.

“You watch this Leeds team there’s a massive enjoyment in their players of how they play and I think Mikel Arteta has got to do one thing in the next few weeks. Results may not come, the performances may not come, but he’s got to make those Arsenal players look like they are enjoying themselves.

“They just don’t look like they are enjoying themselves on a football pitch.

“Watching that game against Everton, I saw a team of players who looked like they were toiling and struggling with maybe how they are being asked to play or they didn’t believe in the system, or whether they think the other players alongside them are not good enough, something’s not right.

“Red cards, ill-discipline, I mean Xhaka… every time he plays he commits 100 fouls, he could be sent off in many more matches with the accumulation of free-kicks he gives away. The Pepe one at Leeds… ill-discipline is a problem but I think they’ve got to look like they are enjoying their football again.

“I know I didn’t look like I enjoyed my football because I was always really serious on the pitch but I always loved to play in this Sir Alex Ferguson team, it was a thrill, we used to go forward, we were committed.

“You watch this Leeds team, I don’t care if they lose because they are committed, they love their football, they are going for it. You watch Burnley for many years who play a different way but they’ve been a committed team.

“Sheffield United last season were brilliant to watch last season, Wolves… methodical, maybe more rigid, but you can see the players have bought into it.

“Mikel Arteta has got to get those players buying into it again. The idea of going on to the pitch believing that, not they were going to win every single football match, but that they love football, that enjoyment, that thrill.

“Arsene Wenger’s team always had that. There was an element of unpredictability with Unai Emery’s teams where they looked like they were all over the place.

“The Mikel Arteta team looks more rigid, more solid but it’s a bit boring and they’ve got to get that out. You can’t bore.

“I used to say that here [at Manchester United]. You can win, you can lose, you can’t be bored coming to Old Trafford.

“And to me the Arsenal players at this moment in time look a little bored and the football they are producing looks like a real struggle.”