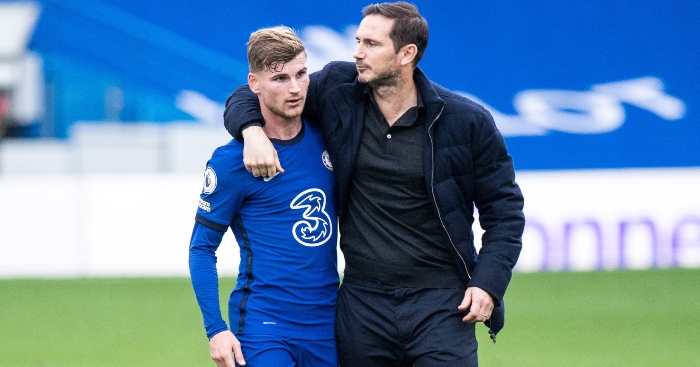 Timo Werner says he is struggling to make an impact on games and score goals due to his new position at Chelsea.

Werner was generally deployed centrally for his former club RB Leipzig but has been used primarily on the left of a front three for the Blues.

The German has failed to find the target for Chelsea in the last eight games and admits he is still coming to terms with his new role.

“I am always ambitious and set myself high standards,” he told Sky Deutschland. “I want to score goals and take responsibility, like I did in Leipzig.

“I now play a completely different position than at RB. I came through the middle, out of the attacking midfield.

“With Julian Nagelsmann I even played as an 8 sometimes. This is of course something completely different now, I have to find myself again here.

“I’ve played good games here on the left and on the right wing, but I’ve never been able to radiate the goal danger that distinguished me from the centre at Leipzig.

“The Premier League is different. Of course, I’ve already shown that I can make the difference in the league, but I also played a few games where I honestly have to say: It wasn’t anything!

“Despite everything, I have a lot of fun here and I hope that the goals are slowly coming in and that I can make my game a little more variable over the left.”

Liverpool star would be ‘devastated’ if he leaves