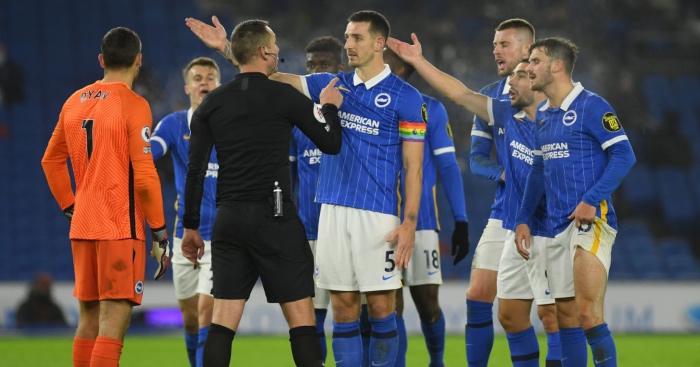 We should enjoy this football cycle while it lasts. A game between Brighton and Southampton – let’s face it – would likely have been a pretty dire affair under previous incumbents Mark Hughes and Chris Hughton. But Southampton’s 2-1 win over Brighton was instead a fascinating end-to-end battle of intrigue – unfortunately soured by more head-shaking VAR bullsh*t – between two excellent teams with excellent managers.

“We often speak about it being impossible to be half-pregnant. Either you are pregnant or not. Half-pregnant doesn’t exist so either you go or you don’t go and when you go you all go together otherwise it doesn’t make sense.”

The light-hearted wackiness of the analogy gives the game away: this was Ralph Hasenhuttl, not Graham Potter. But the basic philosphy of both managers is the same. They direct their players to recognise ‘triggers’ – a miscontrol, a long pass, a dribble – to initiate a whole team press. Southampton and Brighton are either pregnant, or they’re not.

READ MORE: Mourinho is the master of Premier League winners and losers

It’s not the exotic, fancy-pants tactic it was. Mauricio Pochettino’s high press was poured and purred over, as was Jurgen Klopp’s ‘gegenpressing’ and Pep Guardiola’s ‘six-second rule’; the 60-year-old ploy with roots in ice hockey and basketball is now the norm for the foremost contemporary coaches in the Premier League. And will be until Jose Mourinho wins the league to illustrate that the ball is the last thing you want.

A one-minute spell at the start of the game set the expected tone. Southampton first laid a trap, pouncing on a slightly laborious attempt from Brighton to play out from the back to win the ball high up the pitch. Having recycled possession they tried to build again through the middle third but were swarmed by a deeper but similarly effective mass of Brighton bodies, who reacted to the ‘trigger’ of a heavy touch.

It made for absorbing, splendidly chaotic viewing, but VAR will again be the talking point.

Pascal Groß gave Brighton the lead from the spot after midfielder-cum-Harlem Globetrotter James Ward-Prowse was punished for handball. No arguments there. Jannik Vestergaard – who was immense throughout – then equalised with a brilliant towering header. But Danny Ings’ penalty, or rather the awarding of it, will dominate the chat among the 2,000 Brighton fans on their journeys home.

The boos from those fans and the remonstrations of the Brighton players – after the incident was shown on the big screen – were totally fair. Solly March’s shove on Kyle Walker-Peters was outside the box, as David Coote originally thought. It could also have been given if there was a second foul after the initial push, but there wasn’t one.

Ings was asked after the game whether he was more confident in the penalty being awarded the longer VAR looked at the incident. But it should be the opposite, shouldn’t it? If VAR has to look at minutes of slow-motion replays that’s surely proof that any perceived error isn’t clear or obvious.

Brighton perhaps didn’t deserve to win their second game of 2020, but certainly didn’t deserve to lose. And the football they played and have played this season should see them easily pick up enough Premier League scalps to make relegation no more than a subtle threat.

Southampton meanwhile, are up to fifth having won without playing all that well. Typically an indication of title contenders, in Southampton’s case it could well be a telltale sign of a successful pursuit of European football.