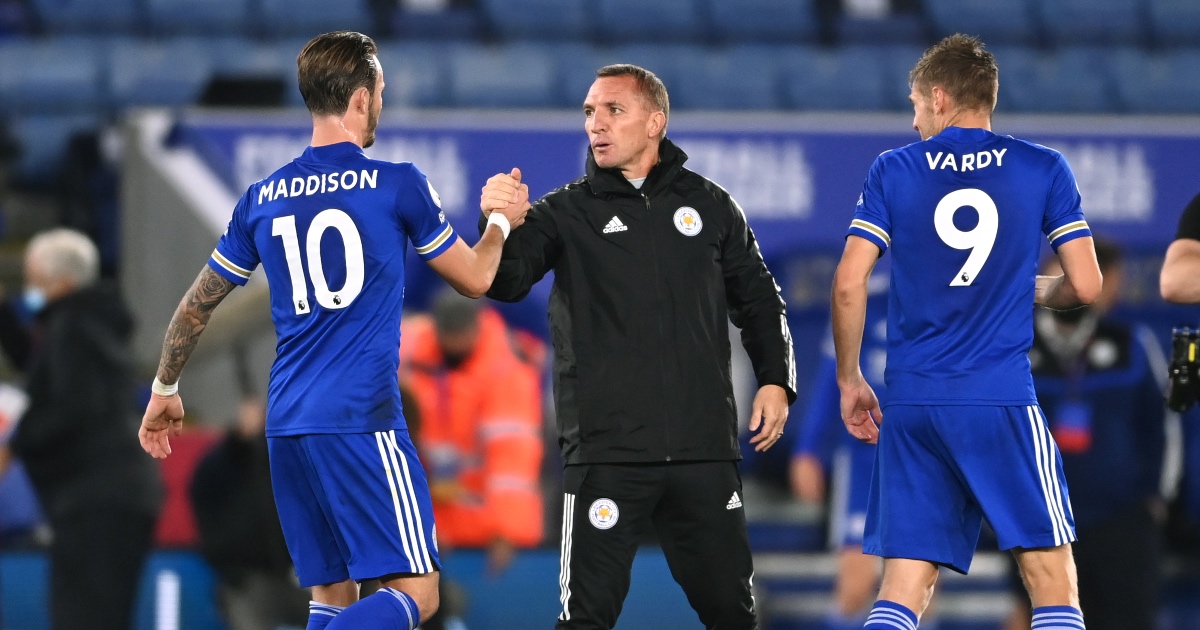 Leicester boss Brendan Rodgers says it is “a Catch-22” at the moment in terms of James Maddison’s playing time.

The England midfielder’s return to action after over a month out due to a hip issue has seen him make five appearances so far.

After two cameos as a substitute, Maddison played around 70 minutes of the 3-0 win over West Brom and 2-1 victory over Crystal Palace, then completed the full duration of last week’s 1-1 draw at Southampton.

OPINION: Should Man Utd stick or twist on a mediocre midfield hand?

Leicester, lying third in the Premier League table, host Newcastle on Friday and Rodgers said: “It’s a Catch-22 with James because he needs the games to get up to full speed, but at the same time they are important games for us.

“He’s a really important player for us. He’s gradually working his way towards that. The 90 minutes was important for him.

“He’s had a good week’s training and then he’ll look to take that intensity into the next game.

“He’s an outstanding player, he’s not at his full level of fitness yet but the only way he’s going to get that is within the games. Hopefully he can perform at his highest level against Newcastle.”

Leicester head into Friday’s contest five points ahead of fifth-placed West Ham with four games left, and Rodgers said: “It’s going to be tight right to the end, we’ve always thought that. We can only really concentrate on ourselves and do our own job.

“In order to finish in that top four you have to win. We’re in a great position on 63 points, we’ve four more games to go, we’ll look to our next game to win and that’s what we’ll look to do in all the games between now and the end of the season.”

When asked about criticism that has been aimed at Newcastle boss Steve Bruce – whose side are 17th, nine points above the relegation zone – Rodgers said: “I think Steve’s done an outstanding job.

“He’s limited in terms of the budget he has to spend on players, but he’s had to go in and organise. Newcastle’s an incredible club, the size of it, the fan base, the expectation there. But he’s gone in, he’s organised them really well.

“Graeme (Jones) has gone in there (as an assistant to Bruce) to help him, and you can see the football idea and how they are trying to shape the team and play. I think he has done an outstanding job, and he’s shown throughout his career that he’s an excellent manager.”

As well as the remainder of their bid to secure Champions League football, Leicester also have an FA Cup final against Chelsea ahead.

There are set to be around 6,000 supporters of each club in attendance at the pilot event at Wembley on May 15, and Rodgers said: “It will be amazing just to see that support there.

“It’s a shame we couldn’t get more but it’s a step in the right direction. To have the 6,000 there will be brilliant.”

There will also be up to 10,000 fans – all home supporters – allowed into the final two rounds of Premier League matches, provided the Government goes ahead with the planned easing of coronavirus restrictions.

Rodgers said: “It will be a pleasant shock. We had it at Wembley a few weeks back in the Southampton game (the FA Cup semi-final, another pilot event), and it was just great to hear the noise.

“I think everyone involved in the game is excited by getting supporters back, and the quicker we can get it up to full capacity the better.”

Guardiola: City ‘suffered’ but their ‘quality’ was the difference