Leicester’s Champions League charge suffered a minor setback after they were forced to settle for a 1-1 Premier League draw at 10-man Southampton.

Saints played 80 minutes a man down after Jannik Vestergaard was sent off for bringing down Jamie Vardy on the edge of the hosts’ 18-yard box.

OPINION: Can Arteta be blamed for worst Arsenal in PL history?

Brendan Rodgers’ high-flying visitors were unable to take full advantage of the early dismissal and the result moves them eight points clear of fifth-placed West Ham in the race for European football, while the dogged hosts extended their advantage over the relegation zone to 10 points.

Leicester, who defeated their hosts 1-0 in an FA Cup semi-final less than a fortnight ago, were back at St Mary’s for the first time since running riot in a record-breaking 9-0 success in October 2019.

Southampton were seeking a modicum of revenge for those painful recent losses but were without injured top scorer Danny Ings, who may miss the remainder of the season with a hamstring issue suffered in last week’s loss at Tottenham.

There was plenty to merit online engagement inside an action-packed opening 10 minutes in which Southampton had a goal disallowed, wasted a golden chance, and were reduced to 10 men.

Saints right-back Kyle Walker-Peters was denied by an offside flag after confidently finishing past Kasper Schmeichel in just the second minute, before the unmarked Nathan Tella scuffed a tame effort at the Leicester goalkeeper having been picked out by Che Adams.

Southampton boss Ralph Hasenhuttl was visibly frustrated by Tella’s profligacy and soon had further reason for irritation as momentum swung the way of the visitors.

Slack defending from Vestergaard allowed Vardy a clear sight of goal and, in desperation to regain possession on the edge of his own penalty area, the Southampton defender lunged at the ball before catching his opponent with his studs on the follow through.

The Premier League later confirmed the red card was for the denial of a goal-scoring opportunity rather than dangerous play and, after Vardy received lengthy treatment on the field, James Maddison curled the resultant free-kick narrowly wide.

Southampton had Ryan Bertrand dismissed in the 12th minute of their embarrassing capitulation in last season’s corresponding fixture and were facing another uphill task.

They showed some resolve as Nathan Redmond fizzed a shot at Schmeichel minutes later, while Youri Tielemans tested Saints goalkeeper Alex McCarthy with City’s best opening of a goalless first half.

Foxes manager Rodgers had initially stuck with the team which beat Crystal Palace on Monday but, with his side struggling to make the most of their man advantage, introduced forward Ayoze Perez in place of defender Wesley Fofana at the start of the second half.

The additional firepower did not initially result in a greater attacking threat and the visitors fell behind just after the hour mark.

Ward-Prowse confidently dispatched the ball into the bottom-left corner from the spot after his clever free-kick led to Kelechi Iheanacho blocking Stuart Armstrong’s powerful effort with an outstretched arm. 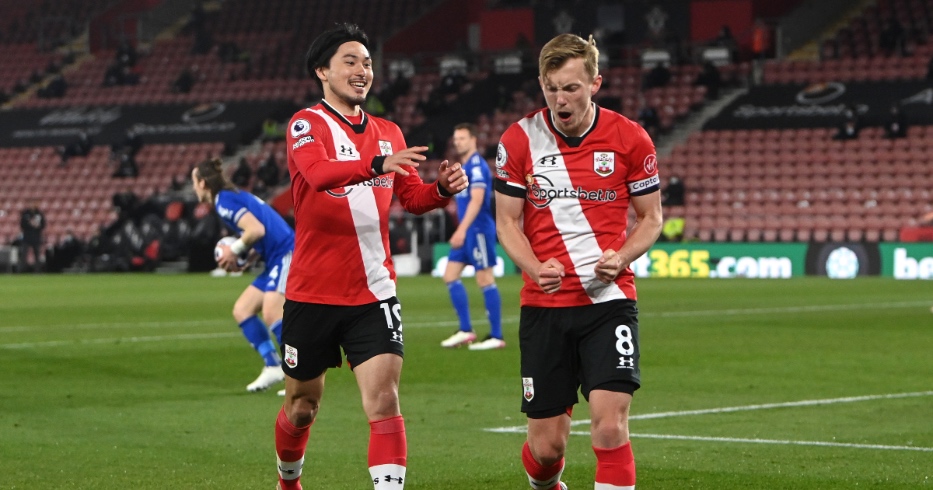 Falling behind kicked Leicester into life and they soon levelled.

Iheanacho made amends for his earlier error by delivering an inviting inswinging cross from the left, allowing defender Evans to nod his second goal in three games beyond McCarthy.

Southampton, who have recorded fewer points than any other Premier League club during a difficult 2021, came under incessant pressure during the final 22 minutes but prevented a 13th defeat from 16 outings through a combination of heroic defending and a slice of fortune.

McCarthy superbly denied Vardy from close range and was later relieved to see the ball flash narrowly over after he flapped at a cross while challenging Iheanacho.

Bergwijn adds to Son and Skipp injury scares for Tottenham

Valverde to replace Solskjaer and Spurs must give up on Alli