Tin Du Học
Home test England are in a final! But there’s time to laugh at Arsenal

England are in a European Championship final but there is a time and a place to laugh at Arsenal and that is now and here in the Mailbox.

Send your thoughts to theeditor@football365.com

I’m 52 and have watched England in major tournaments since 1980. I’ve spent money I didn’t have to follow them around the world including three days in Cape Town in 2010 to watch the bleakest of 0-0 draws. Every game has mattered win, lose or draw. Every 365 ladder has been devoured. Today is special.

It seems like most of the kids I teach at a secondary school can’t talk about anything else. After thirty years in the job, it’s clear that nothing else can do this.

My youngest son expects England to reach semi finals and finals because that’s all he’s ever seen. Today is special.

Today’s game will be shown for years to come just like 1966. Whatever happens, today is special.

We should treasure international football. It is special.

Not sure if anyone’s told you. But it’s coming home.

Not all England fans have been ashamed

I am excited about tonight’s final, possibly because it’s a no lose situation. If England win then the team I support is European champions. (I wanted to say ‘we are European champions’ but I’m not sure I’ve really been involved enough to claim that, ah f* it, We will be European champions) and if England lose then I agree with a lot of the F365 articles about how this campaign is still a victory and achievement of sorts, not every team can be champions but I can get joy out of the journey to get this far.

What I can’t stand is all the nonsense about how supporting England used to be looked down upon or only for the right wing, chest beating, brexit supporting, hooligan, five pints down by kick off types or something to be ashamed of.

So many articles written about how this team has brought everyone together and something we could all get on board and support. Yes this team and what they’ve done is great but I’ve always been on board and supported whoever represented my country, maybe we could have had this sort of England team for years with everyone’s support rather than the negativity spouted by some at F365 and others in society who looked down on the England team as something to be ashamed of until they start winning. How we react as a majority and support and demand expectations from the team would breed the type of team we now have. Look at what happened with the breakaway $$$ super league this year. Yes the red top media would still have tried to rubbish Sterling and other minorities for their own agenda but we know they are going to write whatever sells.

In short, not all England fans have been ashamed. Sometimes the team and players have represented what I have wanted but I’ve still supported and rather than claiming the ideal of supporting England has changed, maybe just accept that as with other sections of the media. F365 are in danger of appearing like they are bandwagon supports.

Never ashamed and here for the long haul. 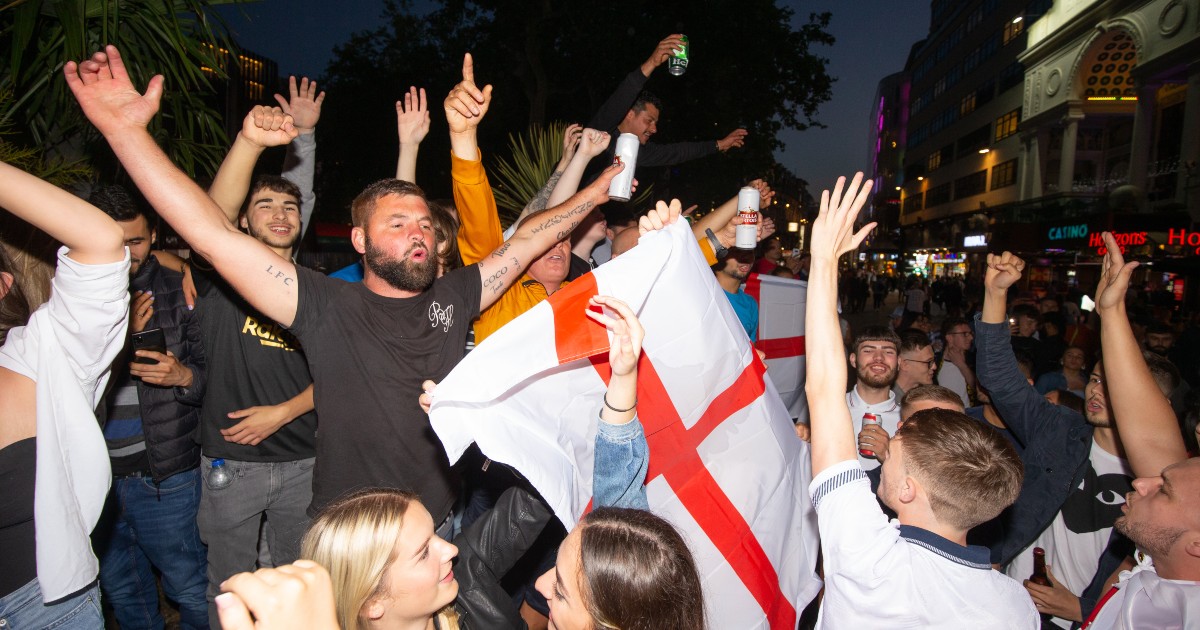 Just following up a mail from the other day about the Golden Generation.

The reason this team is better than the Golden Generation is simple. Central midfield. For so many years we carried on repeating the same error by having two of the leading midfielders in the country in midfield, neither of whom were tactically suitable to staying back and breaking up attacks. In fact, while Scholes and Gerrard might have managed it, we all know the story of that.

Hargreaves was a solid option but injured too soon and rarely used as a starter before.

What makes this team successful is that our central midfield are solid. That’s it. We have some creativity and pace as before, defence is probably weaker but with a good balance of pace and ball playing.

Up front we are probably weaker but the midfield gives them space, something I’ve never seen before for England.

It gets a bit much when we have 8 defenders on but the last game showed that maybe Southgate had learned some balance there.

We go into this final as favourites, something none of us have ever seen. We can do this. Italian threat us down the wings and we are so strong there. It comes down to whether our attack can deliver before penalties.

Bring it home lads. Do the nation proud. And come on the Yorkshire Pirlo!

Really? Commands his box, instructs his back four, conceded one goal ( a worldy free kick) can score a penalty and actually save a penalty. So again tell me the woke warrior that is Southgate should ditch Pickford? While we are on it. Rice should make way for Henderson and Sancho in for Saka.

Hopefully my 4th or 5th published mail.  (Not that ye care but me and my brother have a little thing going.)  And I’m throwing my 2 cents in on England, the final and their manager from an Irish perspective.

Firstly, England.  We want you to lose.  All other, ahem, stuff aside, Irish people think you are unbearable when it comes to sporting achievements.  You know it.  You never stop banging on about ’66.  Also, your press is probably the most despicable, despised entity on the planet, seriously, up there with the worst.  Horrible, horrible racist, violence inciting medium. And then your fans boo your own team regularly and often tarnish the good name of English football with violence.  It does not inspire good will.

The final.  Should be cagey and class.  By far the 2 best teams of the tournament facing off.  No idea how it will go but expect a very compelling game.  Low scoring, dodgy decision, individual error written all over it.  Have to have italy as favourites considering their recent record but we’re talking 51/49.  Not expecting peno’s.  My head is Italy but I feel a Sterling winner (and watch the red tops credit the white boys).

And finally Gareth Southgate.  English men, pay attention.   That is a role model.  Regardless of his level of success or failure, and in the face over exaggerated praise or condemnation, he is honest, thoughtful, empathetic and just nice.  Mind and celebrate him.  Please.

In preparation for England’s potential triumph on Sunday, I’m worried that the anti-Southgate brigade may be left out of the festivities. Shorn of a loss they apparently crave, they’ll be forced to muster weak smiles as their friends and family shake them enthusiastically at the final whistle.

With that in mind I’d like to offer them a few completely fictional conversation points they can use if a dreaded England victory occurs. The aim is to give any and all curmudgeons the ability to express displeasure with the future Sir Gareth in a novel and relevant way. The only advice I supply with them is to spread them out; they may need to last at least until the World Cup group stages.

1. The route the team bus took to Wembley for the final didn’t take the M1 all the way down from their training ground in Staffordshire, but stupidly took the M6 as far as Swinford before righting their mistake. A classic example of Southgate’s tactical naivety.

2. On the day of the final Southgate packed a lightweight England-branded rain jacket, despite the weather forecast calling for clear skies and mid-teens temperatures. This conservative mindset left no room in his gym bag for an optional jazzy waistcoat should he fancy it.

3. Despite it being absolutely within his power to do so, Southgate made no effort to queue up John Cena entrance music for Super Jackie Grealish’s 15 minute cameo towards the end of the game. 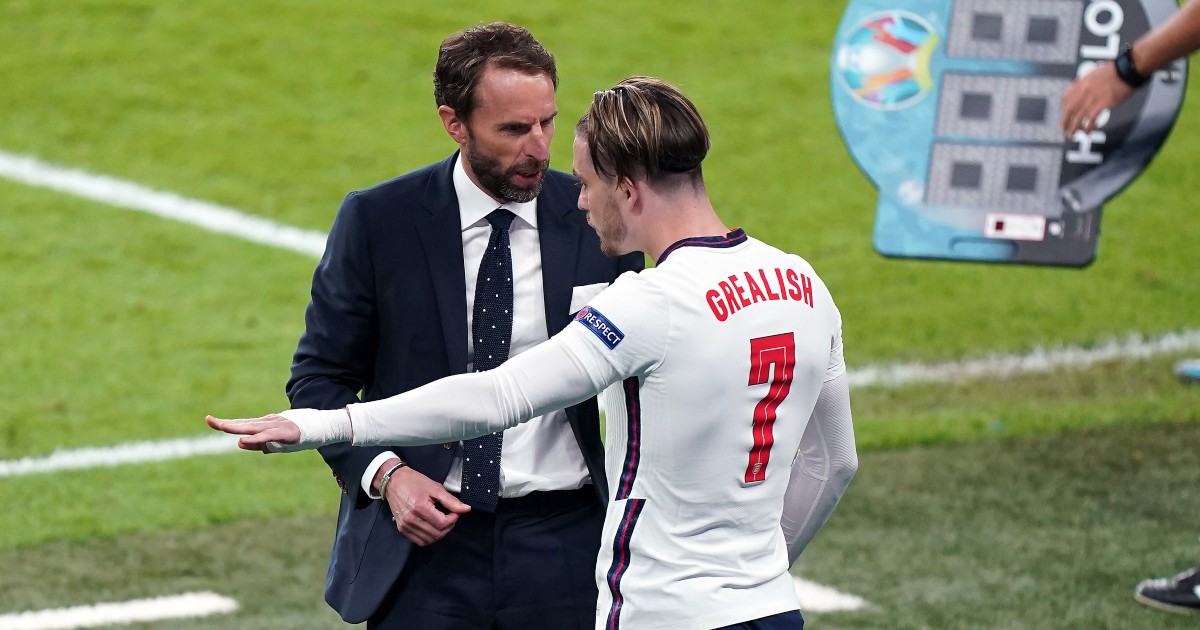 I always enjoy a combined 11 so I thought I’d prepare my own combined England/Italy team with only slightly more arbitrary criteria:

Criteria: most likely to feature in one of those “it’s heartbreaking what Luke Shaw looks like at 37” articles at the bottom of real articles

Criteria: face that most expresses “who the f*** has left a dump on my sofa”

Criteria: most creative use of eye shadow

Criteria: most likely to have a wind-up key slot in his back that the coach just winds up and let’s go at kick-off

Criteria: just doesn’t look like a footballer, does he? Looks, like a trainee door to door button salesman

Criteria: least concealed contempt for interviews with the media who demonised him for years

Don’t cry for me, Argentina

I’d like to see the smirk on Arteta and Edu’s faces having decided that Martinez was not good enough to be Arsenal’s number 1 goalkeeper. After 10 years in the Arsenal wilderness, he helped us win the FA cup last season only to be sold to Villa in favour of the error-prone Leno.

Boy, he was decisive in Argentina winning the Copa America and helping Messi lift his first ever national trophy.Many of us felt he should have been retained as number one, and many gooners are still hurting from that reckless decision.

Another boy who has been mishandled is Guendouzi. Yes, he made a mistake during the Brighton match, but due to his young age, he should have been properly guided. Admittedly, he has tantrums, but that he is a gifted and fiery midfielder, is not in doubt.

Lionel Messi, the greatest player the world has every seen. Even at 34 this guy is still running the length of the pitch and scoring every type of goal imaginable. His assist stats are just obscene. So great to see him finally get his hands on some international silverware. He has been up against it with Argentina, they even foisted a cocaine sniffing manager (Maradonna) on him back in 2010 and then blamed him for not having won it. He gets hardly any recognition back home and I really hope that this silences a lot of his detractors. This guys trophy hall, goal ratio and assists blows away anything in history. Thank you Messi, I feel honored to have watched you.

P.S Cristiano Ronaldo comes a close second in my book. Ronaldinho most magical and skillful player I’ve ever seen tho.

The Sun are advertising Harry Kane once again…