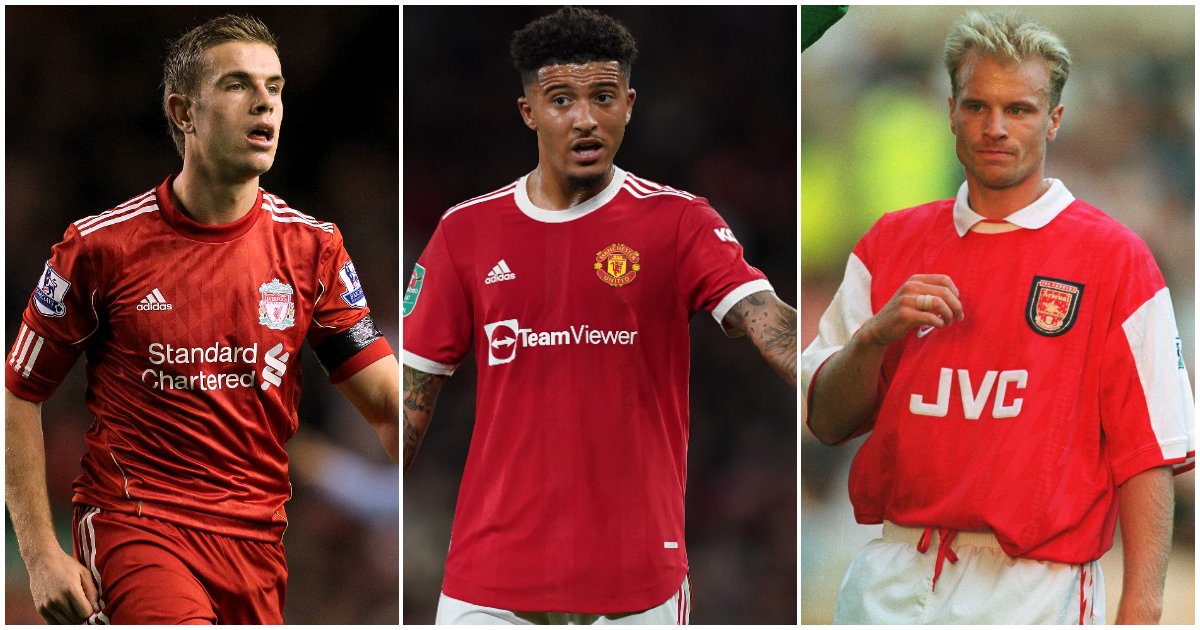 Jadon Sancho is having a tough old time getting to grips with life at Manchester United. But we shouldn’t be too quick to write off the the £73million winger. These guys struggled to settle at first but eventually earned iconic status…

Once voted the sixth-greatest ever player in Arsenal history, it is easy to forget just how uncharacteristically ordinary the first and final chapters of Pires’ stay in north London were. The Frenchman’s spell at the club ended when he was offered as the sacrificial substitute just 18 minutes into the 2006 Champions League final, Jens Lehmann having been dismissed. It was the last time he would be seen in an Arsenal shirt; he joined Villarreal on a free transfer that summer.

It all began in rather nondescript circumstances for the club legend six years earlier. Arriving at the turn of the millennium from Marseille, much was expected of the man who had just helped France complete an international double of World Cup and European Championship victories. But the slight star from Ligue 1 struggled initially, scoring just four goals and providing one assist in his first Premier League season.

Pires himself put the difficult transition down to the change in approach. “When I first arrived it was far too physical for me, very hard,” he said in 2004. “But I made an effort to adapt.” And adapt he did – those comments came just one month after he played an integral role in Arsenal’s Invincibles season.

Will F365 ever tire of recalling the time the Daily Telegraph ranked Roberto Firmino as the 11th worst signing of the 2015 summer transfer window? Not f***ing likely.

Of course, it is easy to ridicule the claim in the delightful glare of hindsight. Although it always seemed a harsh evaluation of an obviously talented player, it was slightly more forgivable (although still a little silly) back when Firmino first joined Liverpool.

It was Brendan Rodgers who sanctioned the £29million signing of the Brazilian from Hoffenheim, beating Manchester United to his signature, but it was difficult to see where the then-Liverpool manager saw the forward fitting in his side. Firmino started three of the first ten games of the 2015/16 Premier League season, and did not score until a 4-1 victory over Manchester City in November. After a slow start, he finished his first season with a dozen goals. Six years later, he’s a Premier League and Champions League winner.

The story is oft-repeated. Manchester United made two signings in the winter transfer window of 2006, bringing in Vidic from Spartak Moscow and Evra from Monaco. Both would strengthen a defence in dire need of reinforcements, but both arrived with no Premier League experience whatsoever. It was a risk, but the kind of risk Sir Alex Ferguson had built a reputation upon making.

One would have been forgiven for doubting the Fergie’s eye for a transfer in the immediate aftermath of the double deal, however. Evra’s debut was mercifully brought to an end at half-time of a 3-1 Manchester derby defeat; Vidic’s Premier League bow came in a 4-3 loss at Blackburn, with David Bentley scoring a hat-trick.

The pair would overcome their early struggles to each win five Premier League titles, one Champions League, three League Cups, five Community Shields and a Club World Cup. Between them, they made 679 appearances for United.

JFH was great. He could score with both feet. He was excellent in the air. He was skillful. He was strong. He was fast. He had an absolute rocket of a shot. His first name is actually Jerrel.

Hasselbaink is not remembered as one of the Premier League’s finest ever strikers often enough. The Dutchman is often an afterthought when conversation turns to Alan Shearer, Thierry Henry, Didier Drogba or Wayne Rooney. It does his 127 Premier League goals an injustice.

That is not to say that Hasselbaink hit the ground running in England. Signed by Leeds for £2million in 1997, the striker scored on his debut in the English top flight in a 1-1 draw against Arsenal in August. He would not record his second league goal until a 4-3 win over Derby in November, a full 13 games later. The Dutchman even wrote in his 2005 autobiography that he struggled to adapt to the pace of the English game. He had managed it by the end of the season; he shared the Golden Boot following a post-Christmas run of 11 goals in 19 games.

The former Ajax star arrived from Inter Milan in 1995 as Bruce Rioch’s first signing for a whopping £7.5million – three times Arsenal’s previous record fee. The Dutchman was joining a team that had finished 12th in the Premier League the previous season, and his arrival, combined with the recruitment of David Platt, signalled the club’s intention to get back to the top.

Despite his status as one of the most talented players in the game, Bergkamp took his sweet time to settle into the Premier League and he was ridiculed for it. No goals in his first seven games drew derision from the national press until he got going with his first goals. And when they arrived, they were worth waiting for.

After a slow start, Bergkamp went on to play for over a decade at Arsenal, scoring 120 goals, winning three league titles and three FA Cups. Now there is a statue of the Dutchman at the Emirates. Likewise Thierry Henry, who also initially struggled with the Premier League.

That’s how long it took for Bale to taste Premier League victory in a Tottenham shirt, and that only came after coming on as a sub in the 85th minute of a 5-0 win. Bale was the butt of many a joke as a consequence of his 24-game winless run, which lasted over two injury-hit seasons.

There was little indication of what was to come for Bale while he was being kept on the bench by Benoit Assou-Ekotto, whose injury gave the former Saint an opportunity to show what he could do. The Cameroon full-back’s return in 2010 prompted Harry Redknapp to shift Bale further forward, from where he tore Maicon a new one.

Bale transformed himself into one of the world’s very best attackers and earned himself a world-record move to Real Madrid. In Cristiano Ronaldo’s shadow, he was a slow burner at the Bernabeu too, but by the end of his his first season he was a Champions League winner and had proved he belonged in the Portuguese’s company.

The Spanish teenager was described by James Ducker in The Times as ‘a kid who won a competition to play in goal for Manchester United’, while Patrick Barclay went even further: ‘The goalie is like a jelly. He isn’t physically capable. He’s Heurelho Gomes without the shot-stopping.’

Mick Dennis was equally as damning in the Daily Express: ‘He’s called David de Gea Quintana. But don’t bother learning all those names. There will be another chap along soon. There has to be.’

There was no hiding it – De Gea’s first six months at Old Trafford were a nightmare. His goalkeeping coach, Eric Steele, called it “horrendous”. But, possibly out of stubbornness and a lack of alternatives, Ferguson kept faith with the former Atletico stopper.

After two seasons under Ferguson, it was during David Moyes’ brief reign that De Gea truly blossomed. Handy really, as United were giving their keeper plenty of practice under the ‘Chosen One’.

De Gea has had a rocky season or two of late, but a decade after moving to Old Trafford, he is starting to show signs of being back towards his brilliant best.

Ferguson didn’t fancy Henderson’s running style and after his first season at Anfield, it seemed like there was plenty of other obstacles in the way of the midfielder becoming a success.

In his first season on Merseyside, during which he made 30 Premier League appearances, it was difficult to identify what it was that convinced the transfer committee to fork out close to £20million for the 20-year-old. He wasn’t a defensive midfielder, nor was he a creative force. He just seemed to exist somewhere around the centre circle, not even pointing and shouting at that stage, while games passed him by.

Indeed, one of Rodgers’ first tasks as Liverpool manager was to attempt to get rid of Henderson. The new boss wanted Clint Dempsey and was willing to let the young midfielder go to Craven Cottage in part-exchange. Luckily for the Reds, Henderson wasn’t ready to give up on Liverpool, even if they were willing to cut him adrift.

The midfielder established himself in Rodgers’ XI during the title-blowing season of 2013-14. The following year, he was keeping Steven Gerrard out of the side before taking the captain’s armband from him in the summer. A decade later, he’s lifted the Champions League trophy and the Premier League pot.

He may have ended up a Treble winner and a Manchester United ambassador, but Cole was not the instant success Ferguson envisioned when he stunned the football world by parting with £6million and Keith Gillespie for the striker.

Arriving a fortnight before Eric Cantona jumped into the Selhurst Park crowd, Cole still managed 12 goals in the second half of the 94-95 season, though five of those came in one game against a dreadful Ipswich side. But his first season will be remembered best for the chances he missed at West Ham on the final day, when United needed just one more goal to win and retain the title.

It got worse. Though writing in The Guardian in 2007 to address the many wrong perceptions of Cole, Rob Smyth summed up his first full season:

‘He was nothing short of embarrassing, crushed by insecurity, the teething problems of a dramatic change in his footballing identity – United bought a goalscorer and made him into a footballer – and, most of all, the obvious contempt shown him by Old Trafford main’s man, Eric Cantona. Against Liverpool at Wembley, he came dangerously close to becoming the first player to have a nervous breakdown during an FA Cup final.’

Ferguson tried to ship him off to Blackburn in part-exchange for Alan Shearer, but Cole shrugged off that, pneumonia and a couple of broken legs courtesy of Neil Ruddock to play his part in another title triumph in 1996-97. It was only when King Eric abdicated his throne that Cole started to truly shine.

A year further on, and Cole became one half of one of the most deadly strike partnerships Europe has seen. He and Dwight Yorke were the first-choice strikers throughout the Treble season, notching 53 goals between them, with Cole scoring the vital winning goal against Spurs on the final day of the season to secure the title.  The five-time title winner also finished the following season as United’s top scorer with 19 goals in 28 Premier League games.

Bamford insists Leeds are ‘getting better and better’ with Bielsa

Ex-Spurs star: Hasenhuttl has shown ‘a lot of faith’ in me