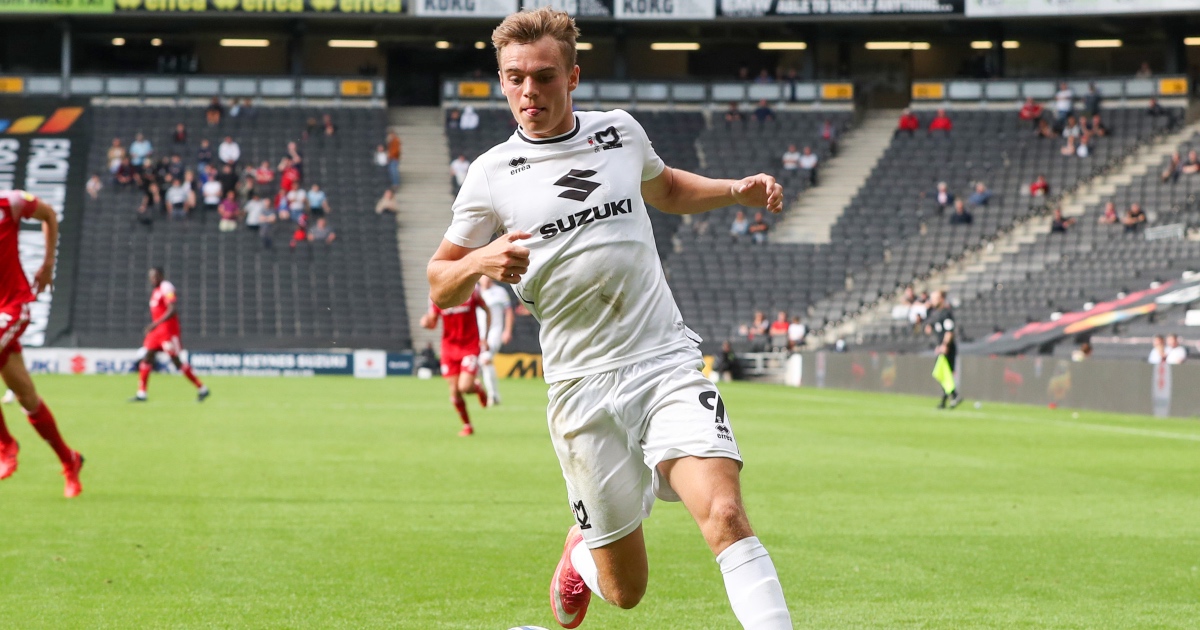 Scott Twine does not score tap ins, except when he does. The MK Dons talisman has been one of the most exciting players the EFL has to offer for quite some time now. The young attacking midfielder has scored a plethora of wondergoals in his fledgling career, on loan at Newport County from Swindon Town, back at Swindon Town, and now for MK Dons.

Against Cambridge, Twine started the day with a close range effort, before setting up striker Max Watters for the first of his two goals on the day, but the highlight was a free kick that put the Dons 3-0 up with just over half an hour on the clock. In the second half, Twine played Watters in for his emphatically hit second for good measure. Two goals and two assists will almost always make you top the winners column.

It would have been easy for MK to crumble when manager Russell Martin departed for Swansea just before the start of the season, but under Liam Sweeting, the Buckinghamshire club are on the up, with performances like this from Twine a sweeping factor.

From column toppers to table toppers, Plymouth have shown multiple signs of intent this season on their march to the League One summit, and defeating an Accrington Stanley so strong at home with consummate ease – in scoreline at least – is the latest feather in Ryan Lowe’s cap.

Very few predicted the Pilgrims to be fighting for promotion in the summer, but approaching the halfway mark of this third tier campaign and it is becoming increasingly impossible to imagine anything other than seeing this side competing in the Championship next term.

Four goals by four separate goal scorers, albeit with the caveat of an own goal to open the scoring, Plymouth look one of the best team units the entire EL has to offer, and taking advantage of closest challengers Wigan and Rotherham both being out of action for the international break, continue to lead the way in the ultimate sense.

If ever there was an impressive interview process, then Charlton Athletic caretaker manager Johnny Jackson is smashing the awkward questions, making eye contact while talking and avoiding spilling coffee over himself on two separate occasions (what do you mean that hasn’t happened to everyone?).

A fourth win in six games, with the only defeat coming in the EFL Trophy and a draw with high flyers Rotherham being the blots on an otherwise perfect record which has seen the Addicks become addicted to clean sheets. In keeping out a Burton Albion side so used to scoring at home, Charlton kept a third clean sheet in four league games under their caretaker boss. Another three-point haul continues Charlton’s ascent up the table and it can only be a matter of time until Jackson’s tenure becomes more permanent.

It was another draw for Sheffield Wednesday, but a day to remember for one of their former strikers. In opening the scoring at Hillsborough, Owls youth academy product Oliver continued his personal rise to reliable League One striker against his old employers who could do with his talents in their squad to turn single point hauls into triple iterations.

Oliver has not quite reached the heights of his debut season with Gillingham, but he found himself on the opposite side of this column in missing a penalty during the last international break, so this is a welcome day out for the former York City man.

For all of Michael Flynn’s excellent contributions to Newport County in his successful spell in charge of the Exiles, the former manager was never able to get a tune out of current hotshot striker Dominic Telford.

Successor James Rowberry however, has overseen Telford’s rise from exile to talisman for the Welsh outfit, who are flying high on the back of a third successive victory in seven unbeaten matches. Telford’s injury time winner, after strike partner Courtney Baker-Richardson gave Newport a first half lead, took County into the top seven on Friday night, a position with which the twice beaten play-off finalists are familiar.

Having played less than an hour and a half of first team football in the first nine games of the season, Telford now has eight goals in the last four outings. Baker-Richardson also failed to make an impact in the early stages of the campaign, making his first appearance midway through September. His opener was the former Swansea forward’s fifth in seven games. For as long as Newport have two hot shots in red hot form, they will continue to rise.

A goal in the first minute. A goal in the last minute. It’s a shame about the two Leyton Orient strikes that came between, but Rochdale know how to start and finish a match.

A club record 14 league games unbeaten now for Exeter City. Ignore the fact that the Grecians have drawn half of their league games this season. Under manager Matt Taylor, Exeter are third in League Two with just one defeat.

Wycombe have not had a good time of it since Halloween weekend. From looking very assured of an instant return to the Championship, it has been quite the scary turn that sees the Chairboys sitting very much not pretty as things stand.

Every team bar league leaders Plymouth in the top six have a game in hand on Gareth Ainsworth’s side. Wycombe’s only victory since the start of October against a side who isn’t one of the bottom two in League One came against Gillingham. Since October 30th, they have given up a two goal lead to draw at Fleetwood, been smashed 4-1 at home to Ipswich, drawn to League Two Hartlepool in the FA Cup, gone down 5-0 at home to Burton Albion in the EFL Trophy and now on the wrong side of another home reverse against Portsmouth.

A replay against Hartlepool is followed by league fixtures against Bolton, Plymouth and Sheffield Wednesday. Unless the Buckinghamshire side buck up their ideas, it could get worse before it gets better.

I do desperately try to avoid criticising refereeing decisions, and there are far worse I will have ignored in previous iterations of this column, but mid-November sees the duck broken because there was no way Oscar Threlkeld should have been afforded the opportunity to be subbed off at half time for the altogether more composed and secure Liam Ridehalgh.

His first booking was as obvious as it was needless, cruelly taking down a Port Vale attacker barely in with a sniff of a break before hacking in a much more needed position 20 minutes later in a ridiculous manner. It was an obvious yellow card, and referee Lee Swabey knew as much, but for reasons unbeknownst, decided to keep the yellow in his pocket on this occasion.

Had Threlkeld received his marching orders, nobody – not even Derek Adams – could have complained. The defender’s withdrawal at half-time spoke to his fortune to have walked off then, not 10 minutes previously. To ruin the spectacle by reducing one side to 10 men is not a factor that should come into consideration from anyone other than the player committing the foul worthy of a red card being branded. This was a poor showing from Swabey, and the 11 men of Bradford ended up taking a point more than they perhaps would have done with one less than their full complement.

Only basement club Scunthorpe have conceded more than Boro this season, who sit two places and two points above the bottom two. In the same week that coach and former England Women’s manager Mark Sampson left the club to pursue new opportunities, Stevenage themselves may be pursuing unwanted opportunities in the National League if they fail to arrest this slide.

Such was Walsall’s fine form in October, rookie manager Matt Taylor was nominated for League Two manager of the month. Such was Walsall’s difficult start to their League Two campaign that even an upturn in form ensured the Saddlers still sit in lower midtable, despite being arguably one of the biggest clubs at this level.

Conversely, one of the smallest in many respects, Harrogate Town, are back on track. A poor run of form has seen the North Yorkshire outfit exit the top three and into the play-off places, but in defeating Walsall 3-1 in the Midlands, showcased the difference in quality between the two sides, regardless of history. Matt Taylor has a job on his hands to close that considerable gap.

Pickford: Neuer in the ‘top three’ ‘keepers of the last decade

The Sun are advertising Harry Kane once again…